← Creativity Make A Difference For The Masters On Social Media! →

The Writer Who Pricked The Conscience Of A Nation 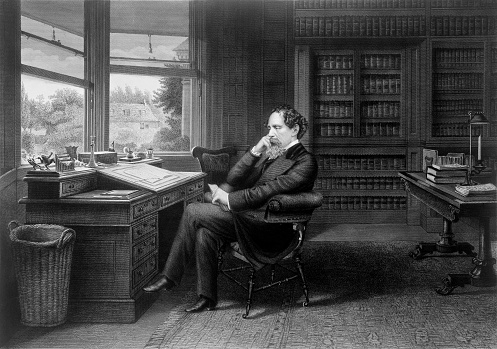 In these uncertain times, when cultural forces that divide and debase rather than unite and uplift seem to be on the rise across the planet, what can a lone writer do to stem the tide? Is it even possible for a solitary scribe to compete in the marketplace of ideas against the supremely clever messaging of “woke” ideologies now coming out of academia, big tech and big media?

Would this not be like shouting into the teeth of a hurricane? Certainly, it would seem so. But it is not.

We need only look to history for a far different and more hopeful lesson.

It was less than 200 years ago that a storyteller changed a nation. His name was Charles Dickens.

Dickens has always been best known for his unforgettable characters: Miss Havisham, Estella, Jaggers and Pip in Great Expectations; Mr. Bumble, Nancy and Fagin in Oliver Twist; Betsy Trotwood, the Micawbers, Dora and Agnes, and the scheming villain Uriah Heep in David Copperfield; and, of course, Ebenezer Scrooge in A Christmas Carol.

But it is the power of Dickens’ fiction to inspire British social and legal reforms that is arguably his most lasting legacy. To put it spiritually, Dickens raised the consciousness of a nation with his stories.

His novels “depicted conditions that cried out for reform, and they brought these areas of Victorian life to the attention of a wide audience, often resulting in action,” writer John Steele Gordon stated. “Bleak House, for instance, published in 1853, depicted the convoluted, lawyer-ridden complexities of the rules of civil procedure then in place in Britain.” Dickens also wrote of these same issues in David Copperfield. “Within 20 years, they had been thoroughly reformed,” Gordon noted.

Dickens exposed to a mass British audience the abominable social conditions of the day. He did this through searingly accurate and often humorous fictional stories. His writing played upon the conscience of a nation at a time when factual exposés on such topics gained so little traction that they were hardly worth writing.

Read by everyone from Queen Victoria on down to the poorest commoner, Dickens’ stories are credited with almost singlehandedly spurring Britain to repeal and reform the most onerous laws of the period. They shone light on the abusive child labor rampant in Britain at the time, and the cruel workhouse prison system the poorest of the poor were forced to endure.

One cannot overstate Dickens’ influence on Victorian England—his only weapon a pen.

So, take a page from Charles Dickens’ playbook and shine a light on today’s darkness. Be creative about it. Dig into the facts. Come at the problem from a unique viewpoint, perhaps a perspective above and beyond a mere human solution. Then tell a story. Touch one heart or a dozen or hundreds. The format you use—straight news, fact-based opinion or fictional short story—is not as important as the Holy Spirit energy you infuse it with—that secret ingredient that’s needed to touch your audience. Write most personally to that one person, that persona, that represents your audience, publish it on the web, and see how you can change a mind or inspire a person to take action.

Originally published in The Heart and the Soul on Medium.com.

← Creativity Make A Difference For The Masters On Social Media! →
← Go back to the menu