← The Privilege of Audience Bringing Into The Light to Real You →

Train To Do The Unforgettable 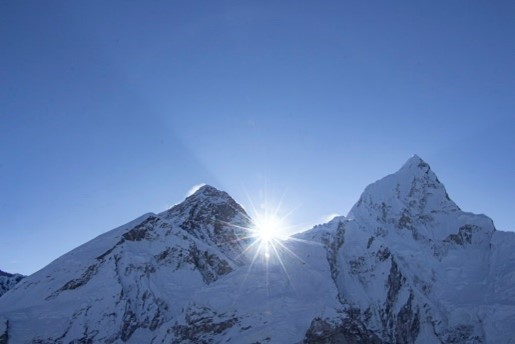 Climbers aspiring to ascend Mount Everest don’t just take a few weeks off work, fly to Nepal, travel overland to one of the Everest base camps, meet their guides and start climbing.

Rather, mountaineers preparing to climb the mountain known to the Nepalese as Sagarmatha, the ‘Goddess of the Sky,’ train rigorously for at least a year prior to their journey to Nepal. Their training regimen includes climbing expeditions with 60lb. packs at increasing elevations, intense cardiovascular workouts, lower-body and core strength conditioning, flexibility training, and psychological preparedness.

To even consider attempting to summit the 29,029-foot (8,848 m.) mountain, climbers must have successfully climbed other 20,000-foot peaks. They also need to have climbed in extreme cold over ice, rock and snow. Their high-altitude tolerance must be proven, since having enough endurance during their Everest climb will be a matter of life and death.

Beyond training, precise types of equipment must be brought to the task. The list is long, ranging from essential climbing gear down to the best type of mug, spoon and even lipscreen.

All this to do something unforgettable: conquer Mount Everest. Or, as Taoists would say, befriend it!

In writing, too, we know what unforgettable is. Stories like Dickens’ Christmas Carol. Lines such as Shakespeare’s “To be or not to be, that is the question.” The wisdom teachings of Jesus, such as “For what shall it profit a man, if he shall gain the whole world, and lose his own soul?”

Sometimes in the realm of unforgettable, words fade, but the special feeling of the story or the teaching lingers far beyond its reading or hearing.

A lot goes into doing anything unforgettable, whether it is scaling Everest or writing a timeless tale. But it all begins with training.

So let’s focus on writing training. Today’s topic is strong verbs: what they are and how and why to use them in our writing.

“Using strong verbs is a must if you want to create a lasting impression,” says Bella Rose Pope of www.self-publishingschool.com. A strong verb “takes something that’s very broad and narrows it down so a reader can get a very specific picture of what’s going on. Think of a strong verb as a really powerful zoom lens,” Pope says. “Your weaker verbs are the zoomed-out bigger pictures you see but you don’t get very many details.”

For example, the so-called “to-be” verbs such as is, am, was, are, be and were, though they certainly have their places in writing, are generally considered weaker verbs. To illustrate, here is a sentence crafted three ways: with a weak to-be verb, a weak verb, and a strong verb.

As the last line shows, a strong verb stands out and adds color to a sentence.

How and when do you replace a weak verb with a stronger one? Well, the first step is to simply be aware of the difference between the two and develop a sensitivity to this detail in your writing. So, as you read your daily fare of news stories, fiction and other pieces of writing, be on the lookout for the differences between strong and weak verbs.

The next step is taking the time to go back to something you may be writing and upgrade your weak verbs to stronger ones. Here, a thesaurus is a must. In addition to using a printed thesaurus (every writer should have one or two right there on the desk), right-clicking on words in your digital documents pulls up an instant list of synonyms. Another great online tool is www.thesaurus.com. Just plug your ordinary verb into the tool, check out the offered synonyms, and pick a stronger one from the list.

Using strong verbs is a great asset for improving anything you write. When you befriend this technique, you’ll be well on your way to the next base camp on Mount Everest!