If You Are A Writer, You Also Are An Editor →

The Power of Story 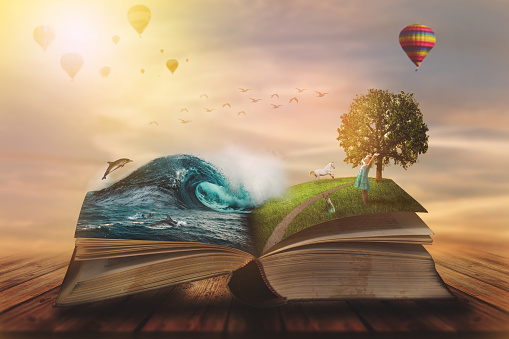 No matter if we write fiction or non-fiction, effective writing almost always includes the use of story.

We learn through stories. We direct our entire lives inspired by stories that have profoundly influenced us. The story of Sanat Kumara and the 144,000. The Nativity story. The story of Gautama, the four noble truths and the eight-fold path. The story of Saint Germain. The story of our mighty I AM Presence and Holy Christ Self… of who we really are.

What are some of the elements of story?

Well, one indispensable element of story is its core idea. “The key is to … build what we call the core idea,” SU’s George Makris noted in one of the recent Writers’ Guild Conversations videos. “Think of it [the core idea] as the trunk of a tree. So if you have the trunk of a tree, everything else is basically a branch and your message is crystal clear and has one thread. And therefore it is easy to communicate.”

Consider Aesop’s fable, The Grasshopper and the Ant, which tells of a grasshopper, unprepared for winter, who begs for food from an ant, who turns the grasshopper away. The core idea, though stark and perhaps even harsh, is simple: if you don’t plan for your own future, others won’t do it for you. It’s a memorable core idea, in fact so memorable that it has remained embedded in the cultures of the world for 2,600 years.

Story creation starts with research, which is three-fold, according to renowned teacher Robert McKee, author of Story. He writes on fiction storytelling, such as screenplays and novels, but his definitions could easily apply to non-fiction writing as well. According to McKee, story research includes research of memory, which is the mining of our personal experience for use in our stories, and research of imagination, such as a writer contemplating in vivid detail what it is like to walk in her character’s shoes. The third element of story research is the most obvious: research of fact.

“A beautifully told story is a symphonic unity in which structure, setting, character, genre, and idea meld seamlessly,” McKee writes. “To find their harmony, the writer must study the elements of story as if they were instruments of an orchestra—first separately, then in concert.” Quite the artistic challenge!

Every good story has a visual element. It doesn’t matter if it is written or spoken. If a story is well-crafted—and quite a lot goes into making that happen—it is easy for the mind’s eye to see. So ask yourself: what is the visual expression of my core idea? If you can see it, you can put it on paper.

Of course, stories can also be shown in visual mediums, such as movies, plays, and videos. Here is how one Keeper of the Flame tells a story about what the Violet Flame is:

https://www.youtube.com/watch?v=HT9_rLsg1jU&t=2s. See if you can discern the story’s core idea. Then think about how you would convey the story of the violet flame—and if you’re feeling creative, put your ideas on paper.

We look forward to continuing the Writers’ Guild Conversation with you next month. Until then, may the fiat of God Mercury be with you!

If You Are A Writer, You Also Are An Editor →
← Go back to the menu